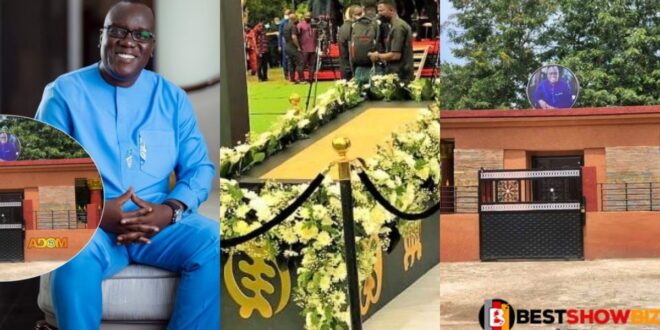 After it leaked online, the tomb of the late Mr Kwadwo Owusu Afriyie, well known as Sir John, has caused a buzz on social media.

He will be laid was laid to rest yesterday, June 3rd, 2021, in the Kwabre East District of the Ashanti region, according to reports.

The late politician’s remains was brought to his hometown by helicopter yesterday, but it was the tomb in which he would be rested that got people talking.

The politician’s lifeless remains was laid in state at Sakora Wonoo Junior High School in the Ashanti Region, and then interred at the Sakora Wonoo family cemetery, according to reports.

Sir John was a founding member and former General Secretary of the New Patriotic Party (NPP) as well as the Chief Executive of the Forestry Commission before his death.

He died on July 1, 2020, at Korle Bu Teaching Hospital after testing positive for coronavirus.