After Dancehall act, Shatta Wale called Sarkodie a hypocrite and trolled him in an interview, some concern fans of Sarkodie took to twitter and advised him and his wife, Tracey Sarkcess.

according to a fan who thinks Sarkodie has been disrespected told Tracey that they should cut Shatta Wale off.

” Mama tray tray, I’m very sure you know your bible well. The Bible states clear in there that “if your right hand worries you cut it off” anaa meboa? So king @sarkodie needs to do the needful. Please . The disrespect is too much. @Tracy Sarkcess“

well, Tracey replied using the words from the new Testaments as;

“I’m not a bible ace but I believe that’s in the Old Testament. In the New Testament, it also says, “love your enemies, bless those who curse you, do good to those who hate you, and pray for those who mistreat you and persecute you…” in Matthews 5’’ 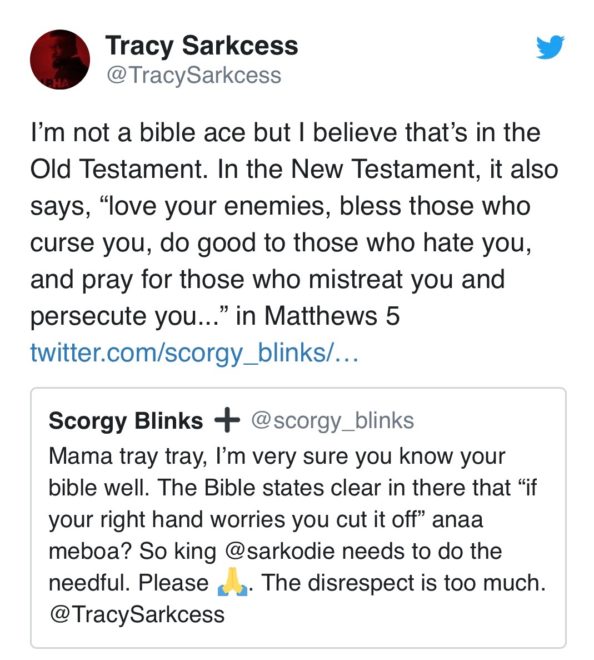 and another fan also advised that;

“It’s high time to come to the realization that, the only brother you have is @manny_kobbs ! Ain’t no motherfaka out there in the industry is your brother! No fool can be tolerated! “

and Tracey again replied as;

“Hmm… I understand your sentiments about this whole issue but it is about maturity and how you deal with certain situations. Taking short-term decisions based on how you feel today can harm/come back to bite you in the long run. It’s about the journey not the goal/prize”