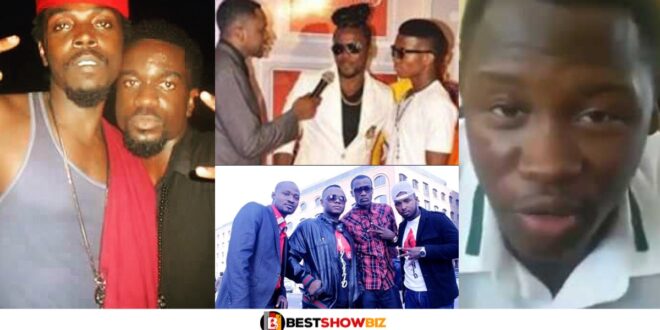 Check out before-fame photos of your favorite celebrities

Some A-list Ghanaians’ celebrities’ beginnings have surfaced on social media.

It highlights documented times when some of the celebrities were just breaking into the profession or were still establishing their footing.

All of the people mentioned in this article are currently successful in their fields.

Check out the photographs and background information below:

The photo above is from when Kofi Kinaata was only an escort for his record label boss, Samini.

He was seen with Samini on the red carpet of what seemed to be the Ghana Music Awards.

His sunglasses have always been a part of his trademark, as evidenced by the fact that he is wearing one in the old portrait.

The photograph was most likely shot on an international music tour.

Kwaw Kese had a guest appearance on Sarkodie’s 2012 tune Meni Dawoso, which turbocharged his climb to popularity.

Sarkodie and Ayigbe Edem used to be labelmates under music producer Hammer.

They have collaborated on several tracks that have gone on to become chart-topping hits.

The two had a friendly connection until last year when Edem called Sarkodie out for failing to show up for one of their video shootings.

The photograph above is of Fella Makafui from the early 2000s when she was a student in a government basic school in Volta Region.

Fella has matured into a curvy and gorgeous lady, despite the fact that her curves are not evident in the shot.

This is a snapshot of rapper Medikal when he was just known as Samuel Frimpong in Odorgonno Secondary School. He was an entertainer who enjoyed rapping even at strange hours of the day.