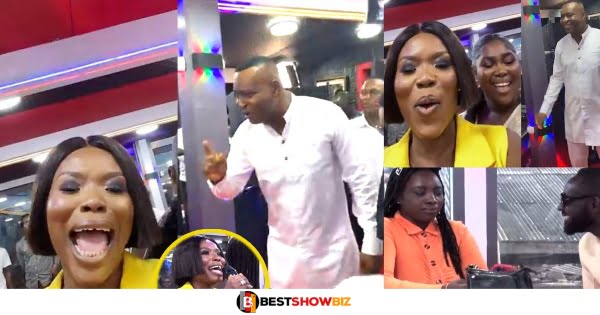 Delay will be celebrating her birthday twice because her boss Chairman Wontumi has paid for a second private party.

The well-known TV and radio host, whose real name is Deloris Frimpong Manso, turned 40 on June 24 and celebrated by posting beautiful images on social media.

She then hosted a private party at PotBelly Shack that was all-white and had a surprise performance by her purported boyfriend, Amerado.

It appears that Delay’s birthday celebration was insufficient since another one was held for the broadcaster at the Wontumi FM offices in Kokomlemle, Accra.

A lot of celebrities can be seen in videos that have surfaced online depicting the event, which took place on Friday, July 1, 2022.

Shatta Michy, Kwabena Kwabena, K.K. Fosu, AJ Poundz, and many other celebrities were seen at the celebration.

Speaking at the event, the chairman of the Ashanti Regional NPP, Bernard Antwi Bosiako, praised Delay and explained why he picked her to anchor the Drive Time Show on Wontumi FM instead of other smart female presenters like Afia Schwar.

Chairman Wontumi claims that since Delay joined his team, everything has been successful.

Read Also  "If you want to know the size of a man's manhood, check the size of his shoe"-Lady discloses.