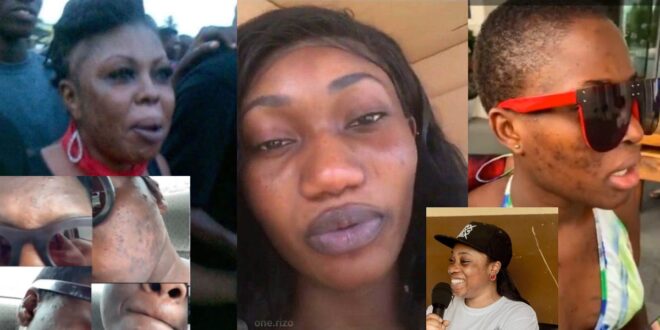 Here are top 5 celebrities who can’t live without makeups

Being a celebrity comes with a whole lot of things, whether to live a fake life or real life, proving you are beautiful, or hide behind makeup and photoshoots.

most of our female celebrities can live without makeup in their homes but not walking out or in any of their posts. Even some of them sleep with makeup.

we have in our possession 5 top celebrities who can not live without makeup after photos of their real faces surfaced.

Wendy Shay:
Afro-pop singer Wendy Shay has suffered from body shaming from Netizens after her photos without makeup surfaced. Even in her makeup, they keep on saying she is not beautiful.
Wendy Shay has hence been living with makeup just to free herself from being trolled.

Afia Schwarzenegger;
loudmouth Afia Schwar is also one of the female celebrities who can never live a day without makeup even after she has been bleached, her face without makeup is always been trolled by Netizens.

Fella Makafui;
Medikal’s wife actress Fella Makafui is also one of our 5 top celebrities who can not live without makeup. Fella was one spotted without makeup with her face full of dark spots unlike the face we have been seeing in her Photos. she also received lots of backlash from Netizens after they realized they have been deceived with makeup.

Princess Shyngle;
Princessshyngle got her fans and followers in shock when she shared a video of her real face full of dark spots and acne. she is always seen in makeup and the said video of her got fans in surprise.

actress Moesha is known to be beautiful naturally but to prevent fans from seeing her dark spot face she is always seen in makeup. she is one of the celebs who can’t go a day without makeup.