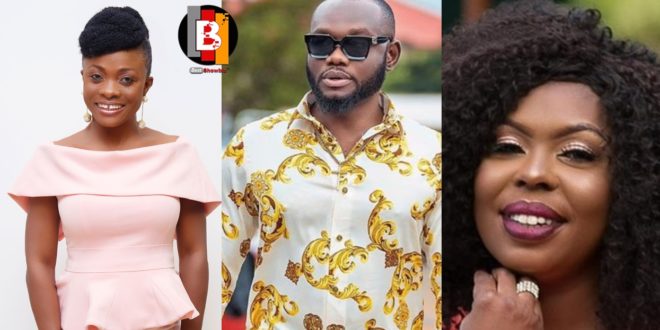 10 celebrities who have endorsed NPP ahead of the December polls

We are just a month away from the D-day, the day ghana elects its 6th president since its fourth republic and unlike any other year, celebrities are showing their political colors.

today we take a look at theses celebs who are in support of President Akufo-Addo and the New Patriotic Party (NPP) as the December polls draw near.

Since 2012 and 2016, the NPP have had some old faces like Alex Kofi Adu aka Agya Koo, Bibi Bright and other endorsing them but this year, more faces have joined the course than previously.

This year, top-notched celebrities in the like of rapper Sarkodie and Samini have also joined the endorsement train for the NPP and the 4More4Nana mantra

There are dozens of public faces in support of the incumbent presendent but today we invite you to check out these 10 of them below:

The Ghanaian actor has on several occasions demonstrated his love for the NPP. David Osei has also publicly endorsed President Akufo-Addo and has been using his social media platforms to campaign for him.

Afia Schwar has been switching sides. In previous years, she activily campaign for the NDC but this year she endorse the NPP and Nana Addo.

According to her, the FREE SHS policy by the NPP has made it possible for her children to go to school free of charge and she is grateful for that.

The radio show host is one of many media personalities and journalists to stand firm by president Nana Addo ahead of this years elections. Andy dosty revealed his face this year as he campaigns for the second term of the NPP.

Mark Okraku is among the old faces who have been beside the incumbent president for ages. In 2016, he was honored as the head of the Creative Arts Council role due to how he actively campaigned for the NPP.

He has been a member of the manifesto team of the NPP  for a long time and noting has changed this year as the entertainment pundit is still sticking with the elephants.

It is no news the veteran Kumawood actor is a staunched supported of the new patriotic party and their flag bearer. In 2012 and 2016, Agya Koo publicly campaigned for the NPP. However, this year he has taken it further as he launched a campaign song for the party.

Bibi Bright is a staunch member of the NPP Royal Ladies; a female youth wing of the party. She has been with the party since 2012 and once revealed her intention to venture into politics.

The dancehall singer’s support of the 4more4nana movement came to light after he released a song dubbed ‘Kpoyaka’ where he was singing the praise of the incumbent government.

Samini has come under severe social media attack for going contrary to his own words of never campaigning for any political party.

Empress Gifty Osei is one of the celebrities who have endorsed President Akufo-Addo. This is coming since her husband, Hopeson Adorye is an NPP bigwig who is aiming to represent the people of the Kpone Katamanso constituency in parliament.

The award-winning rapper endorsed the president and the NPP in his latest song, ‘Happy Day‘ featuring Kuami Eugene. Sarkodie said Akufo-Addo has done so well and needs to be given another four years. This got him being trolled.