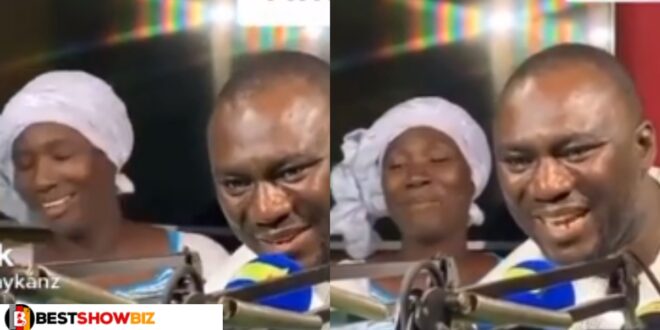 Cecilia Marfo, a multi-award-winning Ghanaian local gospel singer, has revealed the identity of her lovely husband to the rest of the world as a result of her newfound international fame.

Cecilia Marfo and her husband appeared on a radio interview with Abeiku Santana on Accra-based Okay FM, according to a new video spotted by bestshowbiz.

The duo was in the company of local gospel music sensation Brother Sammy, who has been able to capitalize on the success of his colleague by releasing his own album.

The husband of Cecilia Marfo revealed to Abeiku Santana for the first time that his wife’s talent was actually a gift from God when speaking to him.

The gentleman was inquired as to whether he had ever attempted to correct his wife’s pronunciation errors, and he responded that by the time he could correct her, she would have already performed the song, which would have been recorded.

He went on to say that by the time he was able to correct the situation, the video would already be in the public domain.

On being asked whether or not he had ever received a prophecy about himself from his wife, the vivacious man responded affirmatively, adding that it had happened on numerous occasions.

Everyone in the room burst into applause when the man was asked whether he had ever been slapped by his wife while she was engaged in prophetic endeavors.

In response to this, Cecilia Marfo’s husband smiled and stated that nothing of the sort had ever happened to him.