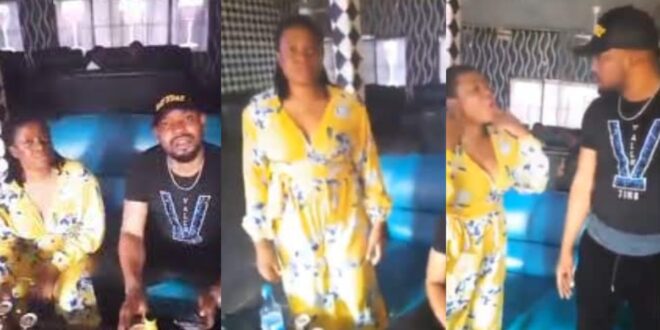 A chilling piece of CCTV footage that has been going around on social media shows a young woman putting an unknown substance into a man’s drink at a hotel.

The lady and her male partner were enjoying themselves at the hotel’s bar when the manager approached them and inquired about the man’s relationship with her.

The man, who had been described as a Nollywood actor, was about to drink the contents of his glass when the manager walked in and ordered him to stop immediately.

The manager persisted in knowing if the man knew the lady, and when the man said that they were friends, the manager proceeded to expose his companion’s nefarious intentions.

The dramatic scene initially appeared to the actor to be a prank until the manager asked the lady to take the drink in the cup for the sake of doubt after accusing her of lacing the drink with a substance.

She flatly denied the allegations and took a defensive position. The manager then escorted them to his office, where a huge screen displayed a live stream from the hotel’s CCTV.