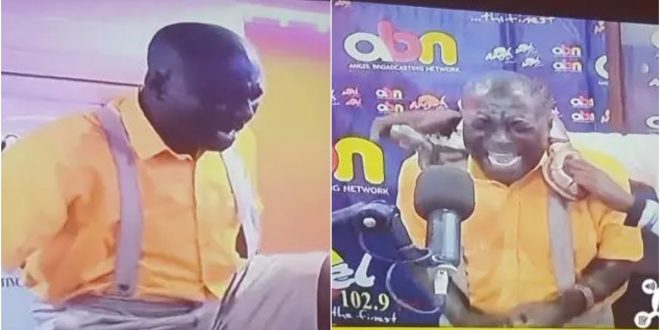 Captain Smart Sent Running out of the Studio After Live Snakes Were brought In.

Every Friday on the Anopa Bofoo newspaper review section on Angel FM, there is a section dubbed Old School where the presenters wear old school uniforms and act like their past days in school. Elderly people who have been in the media are also brought to the studios on this day to share their experiences.

well, today happens to be Friday, and the program was observed with all the presentest available. it started with Captain Smart leading an assemble with Yaa Brefo then followed a classroom session.

in the cause of the session, something hilarious happened as the presented started fleeing while screaming after live snakes were brought to the studios. Even Captain Smart who called for the snakes could barely control himself as he fled in flight upon seeing the snakes.

It took real persuasion to convince him to finally hold one of the snakes. Maame Donkor however did not turn up again till the show was over. She picked her bag immediately she heard that snakes were about to be brought