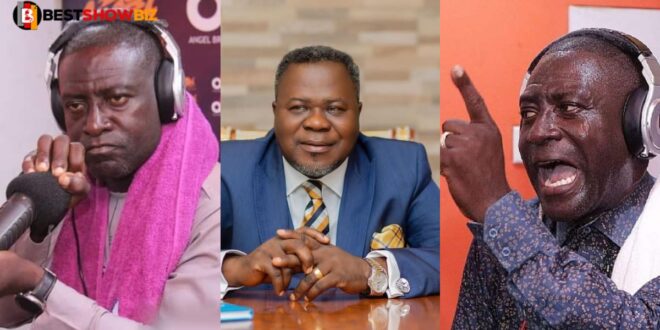 Captain Smart in trouble as Dr. Kwaku Oteng chases him for his Toyota Landcruiser

Dr. Kwaku Oteng, Captain Smart’s former boss, is supposedly chasing him to return a Toyota Land Cruiser he gave him before his dramatic departure from Angel FM.

According to the story, the business mogul tried everything to reclaim his automobile but was unable to. Captain Smart has been issued a bench warrant by a judicial authority of jurisdiction to retrieve the car.

However, Hopeson Adorye and Ernest Owusu Bempah have filed a complaint with the IGP for the arrest of the feisty Captain Smart for disobeying a bench warrant.

Furthermore, in a separate interview, the founding fathers of the Fixing the Country Movement disclosed how Captain Smart once tricked his own employer, Dr. Kweku Oteng, and ended up working for him at Angel FM to pay off his debts.

Read Also  "I will never act 'Maame Water' roles because of what happened"- Vivian Jill.

As reported earlier, Hopeson Adorye and Ernest Owusu Bempah, speaking on Wontumi TV, claimed that Captain Smart resigned from Adom FM because Dr. Oteng was looking for him to arrest for scamming him.

“When Dr. Oteng paid a visit to former President Kufuor, he noticed Captain Smart in the house. Smart did not want to be humiliated when he met him, so he decided to work for him at Angel FM to make up for the money he stole from him, according to Hopeson Adorye.