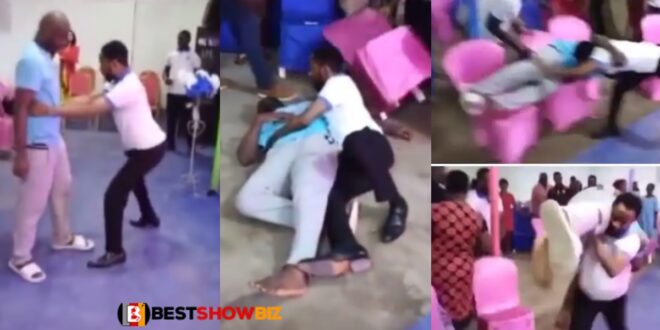 By force deliverance: Pastor throws a thick tall man on the floor all in the name of preyers – Video

A video of a man of God performing deliverance on his fellow man has shocked social media users looking at how it was done.

The pastor, whose name and church are yet to be identified, had a taller male congregant in front of him and murmured some words while caressing portions of the man’s body in the video.

He quickly lifted the man from the floor and hurled him into the crowd.

Both men crashed on the floor, with the man’s weight dragging the pastor along with him as he made the throw.

The man of God tried the second time and this time carried the man on his shoulder, walked to the chairs, and threw him in the chairs.

Read Also  "I want to marry, I can't do this anymore" - L3sbian begs for breakup with her partner in new video

The congregation stood in astonishment and watched the said man of God.