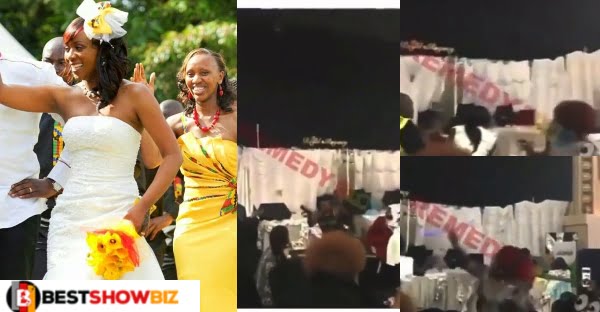 A video of a yet-to-be-identified lady and her gang disturbing at the premises of a wedding ceremony has gone viral.

According to internet rumors, the notorious lady in the video is the alleged ex-girlfriend of the groom-to-be who is getting married.

Her ex-boyfriend was heading down the aisle, so she took it upon herself stormed the venue out of jealousy – pretending she came in peace so she could join the other guests to the ceremony.

A few seconds later, she took action and started causing trouble and according to the footage, her “gang” was seen hurling champagne bottles to add to the chaos.

Read Also  "I had a crush on Nana Aba Anamoah"- Funny face confesses.