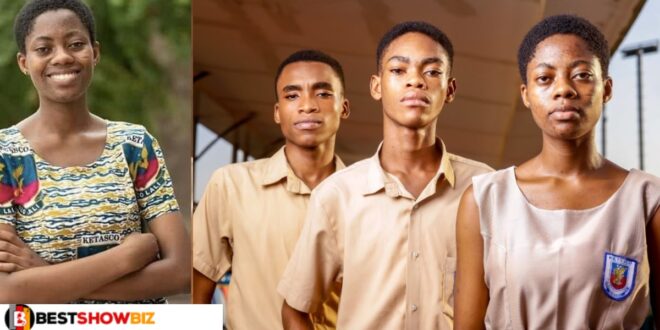 Francisca Lamini was presented with a monetary prize by Citi Fm’s Chief Executive Officer Samuel Attah-Sammens for her performance in the recently ended National Science and Maths Quiz.

Thanks to Francisca and her two teammates, Keta Secondary Technical reached their first-ever final, becoming the first school from the Volta Region to do so in the quiz’s history.

Despite her school finishing third in the finals, behind Presec and winners Prempeh College, Francisca Lamini captivated the hearts of many people, particularly women, both inside and beyond the country.

Despite not attending one of Ghana’s premier schools, she was the best female contender in the 2021 National Science and Maths Quiz.

Read Also  Update on Agnes, the P1 student who crawls to school. she might be able to walk again

Since the competition, she has received appreciation on both social media and traditional media.

He posted: “Somebody please find this young impressive lady for me. Citi TV is just blessing her with a sum of GHS5,000. Please retweet until she responds. Francisca you be too [email protected] #NSMQ2021”