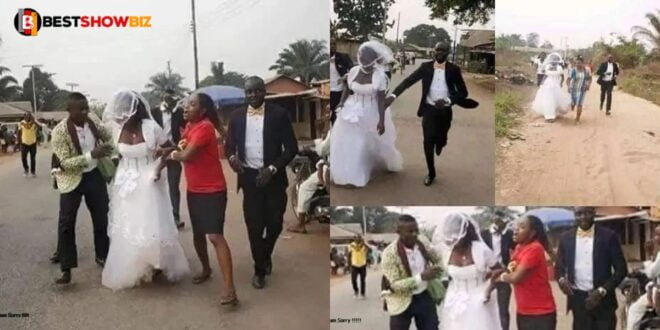 It may appear that being abandoned at the altar is something that only happens in movies, but it does happen in real life sometimes.

After a bride he had dated for years jilted him on the alter, a nicely dressed groom in a wedding tuxedo was left with an egg on his face.
The bride, named as Jackeline Wanjiru, ran away from her wedding ceremony after discovering that the man she was set to spend the rest of her life with was a taxi driver, not the banker he always claimed to be.

During their romance, the man pretended to be a Kenya Commercial Bank employee, according to reports.

However, when she discovered that Alfred Musa, her four-year-old lover, is a taxi driver rather than a KCB Malindi branch employee, she chose to break their relationship and wreck the wedding.
The wedding, which was supposed to take place on Wednesday morning, had to be postponed after the bride vanished while relatives and friends waited.

She was eventually located, but efforts by the groom’s friends and family to restore her to the chapel so that the wedding could continue were unsuccessful.