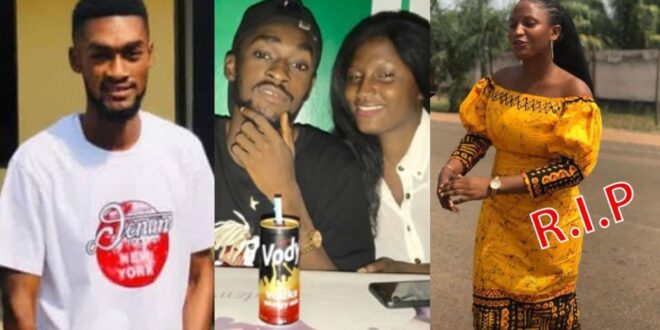 Boy who k!lled his girlfriend in Ho finally speaks after he attempted to k!ll himself

Anthony Jay Dordoye, the lover and alleged murderer of Harriet Kafui Ahiati, a 25-year-old woman who is believed to be his girlfriend from Ho, has revealed that she cheated on him.

Mr. Dordoye is said to have alerted the police that his lover, 25, had cheated on him, according to Ghanaweb.

Things got out of control when he tried to confront his lover Harriet Kafui Ahiati, 25, about the matter, and he allegedly killed her in her home.

According to Sergeant Prince Dogbatse of Police Public Affairs, Jay made the confession while in the operating room after attempting suicide.

Jay is being cared for a cut to his throat and a deep cut to his gut, which caused his intestine to nearly gushe out.

Dogbatse hoped that the nurses at Ho Teaching Hospital would be able to stabilize him and hold him safe long enough to help with the investigation.

Meanwhile, Harriet Kafui Ahiati’s mother has described how she learned about her daughter’s untimely death.

She said she was not present at the time of the attack, but upon her return, she discovered people in her home. When she inquired about the problem, no one responded.

She then opened the door to discover her daughter soaked in her own blood on the floor.