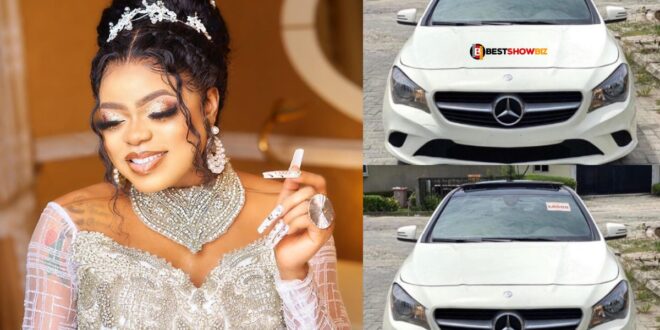 Bobrisky to giveaway his brand new Benz car to a lucky fan.

Nigerian transsexual Bobrisky has said that she is planning to give a follower a Mercedes-Benz and 500,000 naira as a backup for gasoline bills.

She has published a photo of the car she plans to give away to one of his lucky followers as a result of his words.

Bobrisky’s ascent to stardom has never been without controversy. Aside from being a guy who dresses like a lady, Bob has been in the headlines for a variety of reasons.

Regardless, one thing she has done over the years is reach out to those who are in need.

If she really does decide to give this car away, it will not be the first time.

The socialite has always gone out of her way to help others, whether it is by paying their bills or mailing them money.

She made headlines this week for allegedly shooting her erstwhile best pal Tonto Dikeh.

But, even before that, she revealed that she had undergone liposuction to improve his buttocks.

Despite the fact that the process was traumatic, she stated that she had no regrets for choosing the life he did to become a she.