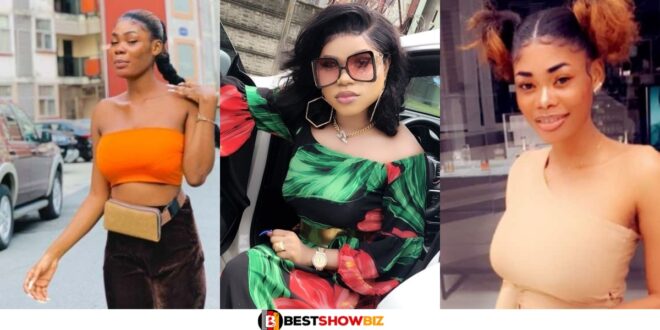 “Bobrisky slept with me every night I was with him”-Former P.A Reveals

Oye Kyme, Bobrisky’s former PA, is back with more devastating claims about the popular Nigerian crossdresser.

Kyme ended her contract with Bobrisky a few months ago and chose to go against her former employer for alleged mistreatment.

She leveled a slew of claims against him and revealed some well-guarded secrets that nearly derailed the celebrity’s career.

Some of the charges included a long list of wealthy Nigerians having affairs with the crossdresser, as well as how he sleeps in make-up to preserve his feminine appearance.

The lady has returned, alleging Bobrisky slept with her every night while they shared a house.

She used her Instagram story to detail the claims, along with proof to back them up.

In her long write-up, the former PA alleged that Bobrisky forced himself on her several times against her will.

Oye also alleged that the transgender compelled her to perform other things.

Concerning Bobrisky’s taste preferences, Oye Kyme stated that the online celebrity poses as a woman on social media but prefers to sleep with the opposite sex.

She claimed Bonrisky used to ask her whether she (Oye Kyme) would be sleeping naked so he could have easy access to her body at night.

Oye Kyme challenged Bobrisky to come out and dispute the claims if he thought what she stated was a lie.

Read Also  One Man, Four Wives, – The Marriage That has shocked Social Media