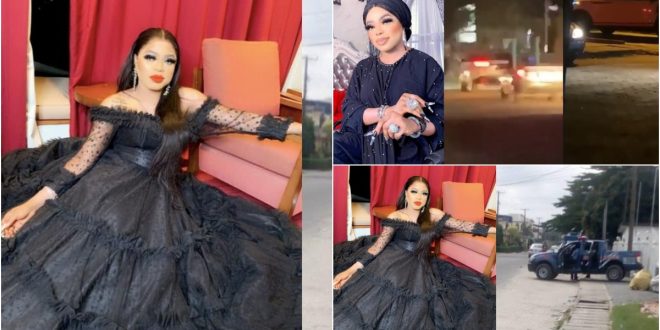 The Nigerian internet personality Born Okuneye Idris Olarenwaju popularly known as Bobrisky has been taken into police custody with a reason no yet known to the public.

According to sources,  Gistlover blog, the popular Snapchat king was spotted in the company of the police in Lekki in her Range Rover and has been detained at Ajah area command, Lagos State.

“Bobrisky has been arrested again!!! Spotted at Lekki phase 1 in his range Rover accompanied by some policemen. We are yet to know the reason behind his arrest but she has been detained at Ajah area command, Lagos State”.

The source not yet knowing the reason has promised to keep in touch on matters of this case and alert us as soon as any new discoveries are made so stay in tune.

Read Also  All You Need To Know About Amina Rawlings, the 3rd Beautiful Daughter of Jerry John Rawlings

Bobrisky is a Nigerian internet personality who is known as a transgender woman in Nigeria, a country with no LGBT rights. base on this bold decision, he disgusts most Nigerian while others love him for his bravery.

Bobrisky was able to gather traffic to her Snapchat account when she claimed she had a lover who is assumed to be of masculine gender despite the law in Nigeria stating that same-sex relationships are offence punishable by serving 14 years in a penitentiary and sometimes by death if under the Shari’a law.