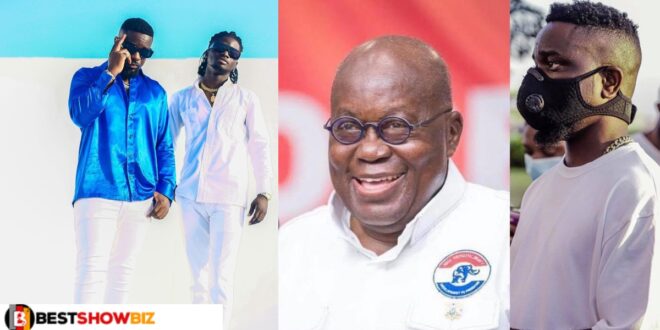 “Blame Sarkodie for Ghana’s Hardship, he tricked us to vote for NPP” – Netizen Says

Following the 2022 budget statement and the fiscal policy delivered by the government in Parliament, a flood of emotions has been unleashed on social media.

The Finance Minister, Ken Ofori Atta, outlined certain new policies that the government will implement in 2022, but this new resolve was not well received by Ghanaians, as many of them have expressed their dissatisfaction with the ruling New Patriotic Party, NPP, led by President Akufo Addo, over the way they are handling the country’s affairs.

A Twitter user identified as AsepaGhana has blamed rapper Sarkodie, Samini, and other celebrities for the plight of ordinary Ghanaians.

According to AsepaGhana, Sarkodie is to blame for Ghanaians’ current plight.

According to the tweep, Sarkodie took money from the NPP and told Ghanaians in a song that they should continue to suffer because of free SHS and free electricity.

Sarkodie’s words in the ‘Happy Day’ song, according to AsepaGhana, were such a bad endorsement from a big brand like him because the effect of his commentary is what Ghanaians are experiencing today.

Read Also  "There is nothing like heaven and hell; it's all a lie"- Kwame A Plus (video)
Share