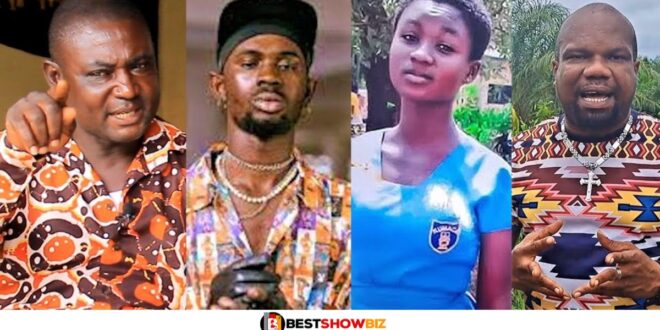 The father of Black Sherif’s first girlfriend, Clementina Konadu, has expressed regret over the musician’s ‘Oh Paradise’ song, which he wrote for his late daughter.

Oh Paradise, a song written by Black Sherif as a tribute to his first girlfriend, Clementina Konadu, who died in 2017, has become an instant hit.

The girlfriend, a 17-year-old Kumasi Academy student at the time, was one of two casualties of the school’s infamous disease outbreak in 2017.

Images of Clementina Konadu and her love story with Black Sherif are trending alongside the song.

We don’t know what triggered it, but it appears that the late Clementina’s father isn’t pleased with the song and the boyfriend-girlfriend stories that go with it.

Abro, a vlogger from Kumasi, interviewed the father, who expressed his dissatisfaction with the situation.

He claims that when his daughter died, no one came to the family to introduce himself as a boyfriend, so he doesn’t understand why Black Sherif is doing this type of song 5 years later.

In rage, he stated that it would not be surprising if Black Sherif knew something about his daughter’s death.

Read Also  Exposed: The Manager Invested Over $300,000 in Black Sherif's career before he left him.