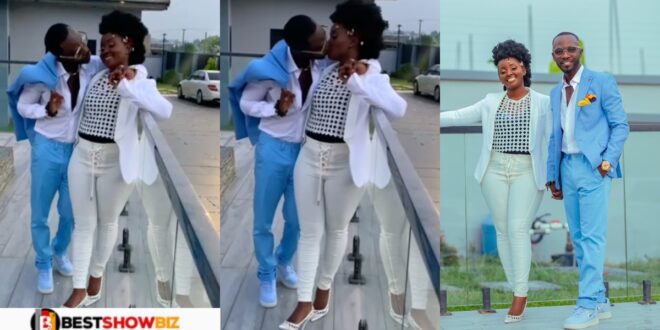 Okyeame Kwame, an award-winning rapper, and his wife, Annica, have been named Ghana’s top celebrity pair for 2021.

In the 2021 YEN Readers Choice Awards, Okyeame Kwame and Annica were voted the best couple. Stonebwoy and his wife, Louisa, Sarkodie, and his wife, Tracy, and Medikal, and Fella Makafui were also nominated.

Mr and Mrs Okyeame, as the pair is popularly called, won comfortably after the voting. Following them were Stonebwoy and Louisa, Medikal and Fella, and Sarkodie and Tracy.

The YEN Readers Choice Awards is an annual poll YEN holds for its followers to select their best entertainers for the year within various categories. The 2021 edition is the second time.

Below is the result of the poll as posted on our Facebook page:

Fans reactions and reasons for their respective votes

A number of the voters had reasons for their choices. YEN.com.gh compiled some of the reactions.

“Mr and Mrs Okyeame Kwame. They are the best couple and their combination says it all. Keep soaring Okyeame.”

“This one de3 my very own Mr and Mrs Addo awe p)t)))… I don’t normally see them together mpo.”

“They are my family crush i really do love them both i don’t know what i will do if i meet the sending them a lot of hugs @ Okyeame Kwame family.”

The readers voted for Jackie Appiah in the second edition of the YEN.com.gh Readers Choice Awards.