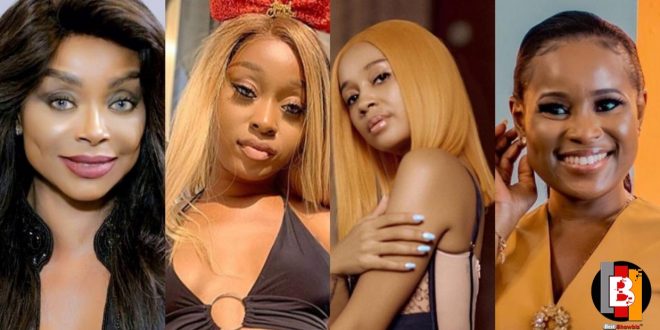 Ace tv personality Berla Mundi has gotten the bad side of social media users after her interview with a rape victim identified as Hannah Mawusi created laughter while sharing her(Hannah) ordeal.

Hannah Mawusi Fiamevor, while narrating her rape-experience to the TV host Berla Mundi on the “The Day Show” aired on TV3, told her story with a funny twist although a serious matter and this got the guests and Berla herself laughing over during the show. Click here to watch the interview

with this, some “say no to rape” advocates in the likes of Stephanie Benson, Efia Odo, and Sister Derby took to social media in airing their disagreements and disgust to how things turned out to be when Berla Interviewed Hannah Mawusi.

check their reactions below:

A Girl talking about a violent Rape like a comedy show. An Emotionless Presenter Responding to Rape Victim like they re talking about a Bad Film. If that wasn't bad enough a fucking laughing Audience. What the Hell is wrong with society. God Forgive Us. https://t.co/QvBCiO3s2d

The host of the show couldn’t take a few seconds to speak to the audience and tell them that this is no laughing matter ? Goes to show how we Africans don’t take rape serious

Someone who insisted on making a whole interview with me on live television about me being against another woman, instead of exposing the guilt of a man in question, when I was only there to promote my EP. I’m sure she was even tempted to ask what the girl was wearing. 🤦🏽‍♀️