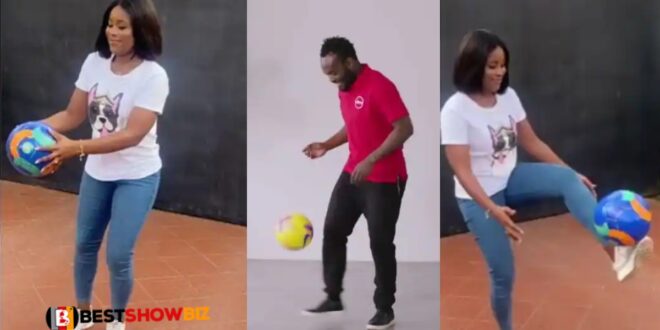 TV3 broadcaster, Berla Mundi, has been spotted in a new video showing off her football skills as she challenges former Black Star player Michael Essien.

Berla is wearing a white t-shirt over blue trousers and matching white shoes in the video.

In the video, she grabbed a football in her hands before dropping it and attempting to juggle it.

Berla attempted again after struggling with her first try, this time striking the ball with her thigh. After the ball had passed, she broke out laughing.

Following that, Michael Essien, a former Chelsea midfielder, popped up in the video and showed off his own juggling skills.

Berla Mundi shared the video and asked her fans to call her Stephen Appiah.

“Call me Stephen Appiah …. So I decided to battle it out with @michaelessien on ‘totas’ and I gave him an ‘Assist’.”