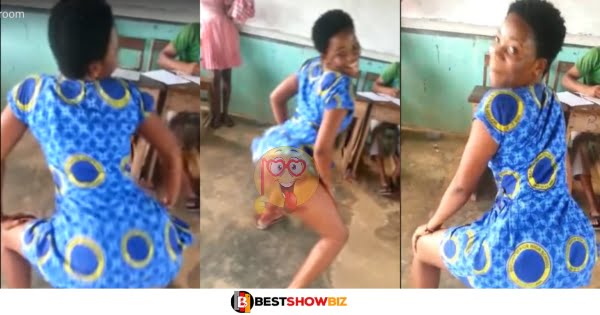 In light of the recent footage of a female Beposo Senior High School student, some Ghanaians have argued that this was merely a “good time gone wrong”.

Some have slammed her and urged the school’s authorities to “reprimand” her at the same time. But others have advised Ghanaians to be more judicious in their critiques of the youngster, knowing that individuals have committed suicide over far less serious issues than this.

Several Ghanaians were surprised to see a female student from Beposo Senior High School partially nude while twerking to Medikal’s Wrowroho, which was released in 2013.

After it was posted online, the video of the female student went viral.

Some Ghanaians have reacted since the article about the Beposo SHS girl was posted on Facebook.

‘‘I don’t support what she’s doing but once in a while we all go crazy in our dormitories and classes.. Just that we had no phones to broadcast these things.. Even watching this video you see she was surrounded by only ladies and I believe she would not do this in the presence of guys…As for me I think the one who posted the video on social media crossed the limit.. We all play,”

However, Odinoho Yaw Odinoho, disagreed with Nana Ghartey while indicating that:

”We are sick as a people. People are defending her and apportioning blames. Think for a second that was your sister or daughter. Can you imagine the pain? Let’s Begin to seek solutions for such unacceptable behaviors.”

”We should begin considering searching for the culprits when such cases arise. If two of both culprits get the ultimate punishment either through lashing or much harsher punishment, it will cease. No lady will allow such videos recorded n no one will post them. This is sickening,”

”Those days we attend school not only for ourselves but for our parents too. We don’t want their toil to be in vain so we do the needful.But now nothing to motivate some of them ,after all it’s “free”.

Social links to Captain Mayhem profile can be found by clicking on the social icons below.