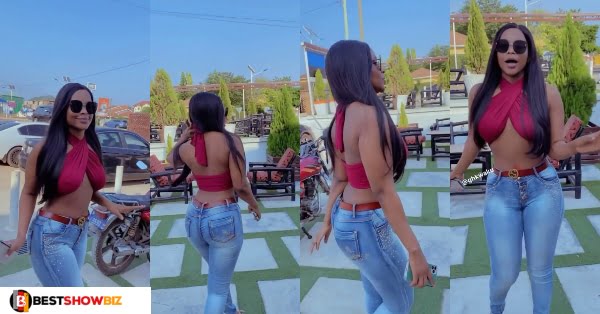 Benedicta Gafah is the latest Ghanaian celebrity to demonstrate a significant divide between her online and offline lives.

Use Ghanaian celebrities as a yardstick when you are told not to believe everything you see on social media.

According to social media accounts, they are some of the most attractive and successful individuals on the planet.

The actress was spotted in a video taken by blogger GhKwaku a few days ago.

With one notable exception, Gafah was her usual slaying self, albeit with a noticeable absence of her normally enormous hips.

She was walking around in comfortable jeans and tops, with her hip pads snug at home, because she had not prepared for any large photo uploads in a studio.

As a result, Kwaku’s usually massive hips were normal size when she uploaded the video.

Gafah is back online today, which means her usually massive hips have returned.

She posted a photo, and it is clear that the hip pads have been repaired, giving her the large hips she has always flaunted.

It is clear, however, that these pads are to blame for her shape, and it backs up fans who recently accused her of wearing a shifted hip pad.

Take a look at Bene’s new photo and compare it to the video above.