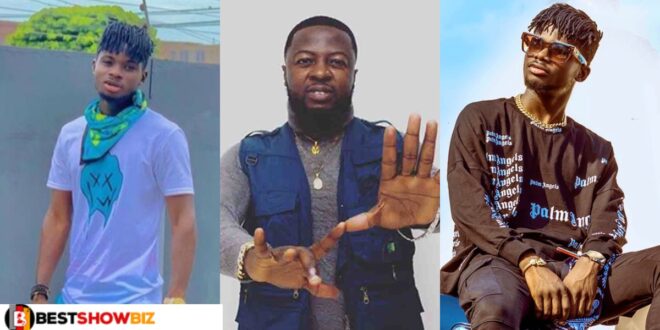 Beef Alert: Kuami Eugene blast Guru once again after the two settled their differences months ago

While appearing on Kumasi’s Angel FM for an interview, the  LYNX Entertainment artist didn’t hold back in his description of Guru and other singers that criticized him simply because he turned down their feature proposals as “foolish.”

If a fellow musician verbally attacks him simply because he did not jump on his or her song after being requested, Kuami Eugene believes that this is really stupid on his or her part.

The “Angela” singer went on to say that his management receives a large number of phone calls each day from people seeking a feature with him, but that they are unable to keep up with the demand.

He also took a go at musicians who believe they are veterans and so require him to automatically agree to be on their songs. Most likely, he was referring to Guru and citing the events that led to their feud.

Kuami Eugene is alleged to have said the following:

I can’t be on every song because if I did, I would have appeared on multiple tracks because Lynx receives requests for a feature with me on a daily basis.

It wasn’t just one individual we couldn’t work with; some of them were even celebrities, yet we couldn’t get along. It doesn’t mean the individual should come into the studio and attack me or a member of my family; it would be pointless. If the flow comes and we work together, that’s great, but don’t disrespect me if we don’t…“

Read Also  "Any man who marries a slay queen who has done body surgery is brainless"- Ibrah One.
Share