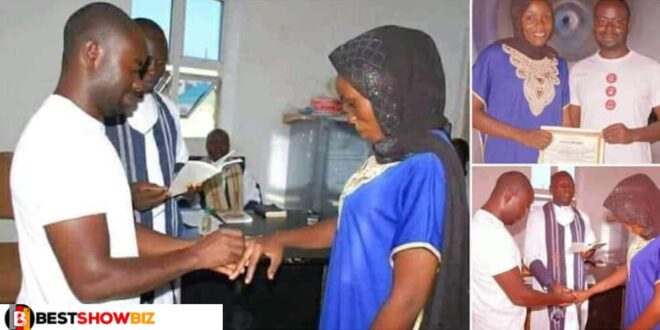 Marriage has become one of the most expensive things that people who are of legal age and wish to have a family can do for themselves and their children.

After all, a guy and his fiancee are credited with having the world’s simplest wedding ceremony after they both arrived at the pastor’s office wearing nothing but their wedding rings and a regular dress.

According to sources, the couple did not invite their family or friends to their secret wedding, which prevented the general public from celebrating their happiness with them.

This picture has quickly gone viral since the man is wearing a polo shirt and the lady is dressed simply in a green straight dress. The pastor officiated the wedding in his office, which is where the picture was taken.

Read Also  Pastor arrested for allegedly k!lling his wife over a fight