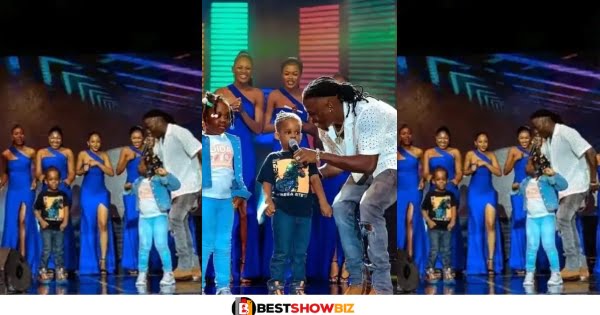 Livingstone Janam Satekla and Catherine Jidula, Stonebwoy’s kids, have given their father a Father’s Day gift.

On Saturday, June 18, Jidula and Janam joined their father on stage as he gave a performance at a gathering at the Accra International Conference Center.

Stonebwoy is seen giving an exciting performance for attendees at the event in videos viewed by Bestshowbiz.com.

Jidula and Janam hit the stage in stunning attire halfway through the performance, to the applause of the spectators.

He proudly described how JIdula had made him a parent for the first time.

Eventually, Stonebwoy moved in amongst the kids and began singing and dancing to his hit song, Sobolo, while inviting them to join in.

Along with the children, Stonebwoy also played his most recent single, Therapy. He placed the microphone in front of Janam, who instantly began singing.