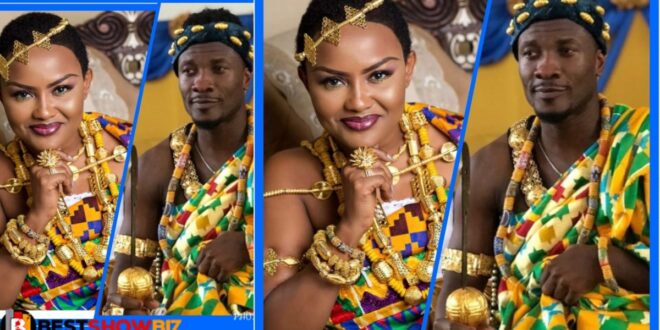 Let us take a close look at the image above and see how they were crowned as “King” and “Queen” of the regions they don’t come from.

Asamoah Gyan, a former captain of the Black Stars who was born on November 22, 1985, has been appointed as a chief in Hohoe, Volta Region. This activity took held on May 30, 2019 at Saint Francis College of Education[Franco] in the Volta region.

However, it is acknowledged that Asamoah Gyan did not originate from the Volta area of Ghana, despite being proclaimed King.

Furthermore, Asamoah Gyan’s parents [Baffour Gyan Mensah and Cecilia Amoako] from Ghana’s Greater Accra Area were not from the Volta region. Only his mother, Amoako, was a student at Saints Francis College of Education in Hohoe, Volta Region, during one of her studies.

So, why was he placed as a king despite the fact that he did not originate from that region, or is he the only one who has such privileges? – Just keep reading to dispel any doubts.

The Ngoriya-Doemenyotor of the St. Francis College of Education and the Gbi Traditional Area, in charge of development, is Gyan’s King title.

Gyan’s efforts in resolving the school’s water problem are being recognized with this episode.

Gyan paid $3000 towards the building of a mechanized borehole at the school through his foundation. The facility will assist to solve a long-standing water issue at the school, where pupils previously had to trek 2.5 kilometers to get water.

Asamoah Gyan was also granted an honorary doctorate degree by Alfred Noble University in Ukraine in July 2017 for his contributions to his nation and the many clubs he has represented during his career.

However, Asamoah Gyan[Baby Jet] was not the only one who was enthroned as king of a land he had never visited.

But one of Ghana’s celebrities was also proclaimed Queen of a Country she had never visited. Nana Ama McBrown is the name of this celebrity.

Fiicity Ama Agyemang (born August 15, 1973 in Kumasi), better known as Nana Ama McBrown, a Ghanaian actress, was placed as Queen of a location she did not originate from as a consequence of her good and hard work.

Nana Ama was enthroned as the Nkosuohemaa (or ceremonial queen-mother of progress) of Assin-Basiako near Assin-Fosu in the Central Region of Ghana on July 15, 2007.

Nana Ama’s parents [ Kwabena Nkrumah percent Cecilia Agyenim Boateng – from Ashanti Region Kumasi] did not originate from any of the Central Region’s regions where their daughter was proclaimed Queen.