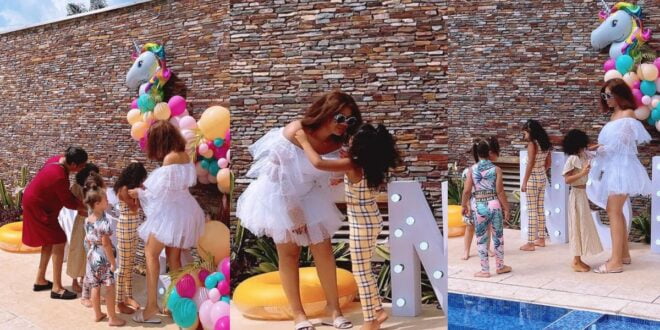 Nadia Buari, a beautiful Ghanaian actress who has refused to show the faces of her daughters for reasons best known to her, has left her fans smiling with these adorable photos.

The mother of four lavishly celebrated the seventh birthday of her eldest daughter, who is now seven years old, over the weekend.

According to the photos, the birthday party was held in her plush home, and no outsiders were invited in order to keep her children’s identities hidden.

Nadia hugged her daughter so tightly in one of the photos, and as usual, she made sure the girl’s face was hidden in the photos.

Most Ghanaians who have seen the enthralling photos have praised the actress and her lovely daughters.

She captioned the photos as: