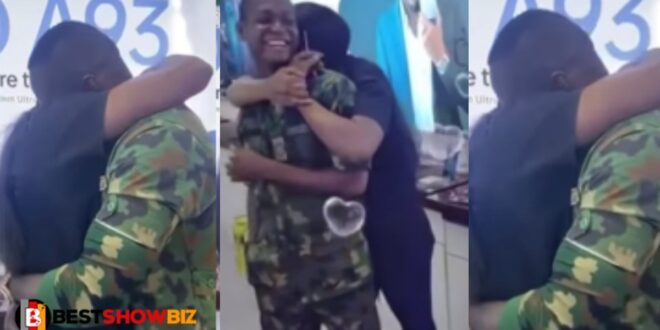 Beautiful video of an armed forces man and his colleagues storming his girlfriend’s workplace to propose to her.

Love is sweet when you discover the proper person; in fact, he who discovers love discovers the most beautiful thing.

The military officer, on the other hand, strolled into the showroom to surprise his girlfriend while she was engaged in a conversation with another military officer who had organized the surprise proposal with her lover.

The man was caught on camera kneeling in front of his girlfriend to propose marriage to her with the magnificent ring.

The lady wandered in circles, overwhelmed by her emotions, until she eventually extended her hand in exchange for the ring. In the midst of mixed feelings, the amorous couple hug as their friends celebrated their love-up moment with them.