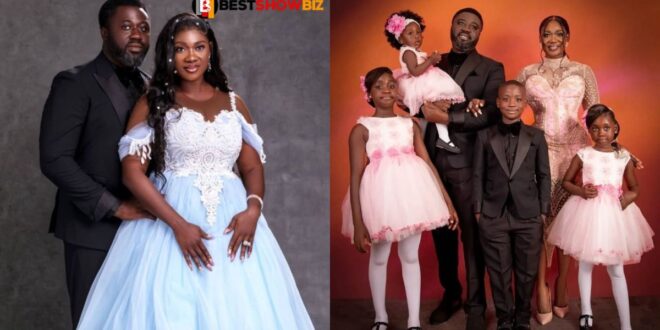 Beautiful: Mercy Johnson and her husband celebrate 10 years of marriage

Mercy Johnson-Okojie and her husband, Prince Okojie, recently celebrated their tenth wedding anniversary in style.
The couple married on August 27, 2011, and they have four children together.

Mercy Johnson and her husband arranged a family photograph to commemorate their wedding anniversary, and they looked lovely.

Mercy Johnson was once barred from performing because she was too pricey. On November 3rd, 2013, Nollywood movie marketers threatened to ban her from the industry due to her excessive demands.

Following an apology from the actress, the prohibition was revoked by marketers/producers on March 9th, 2014.

See the images she took of her family to commemorate her tenth wedding anniversary;