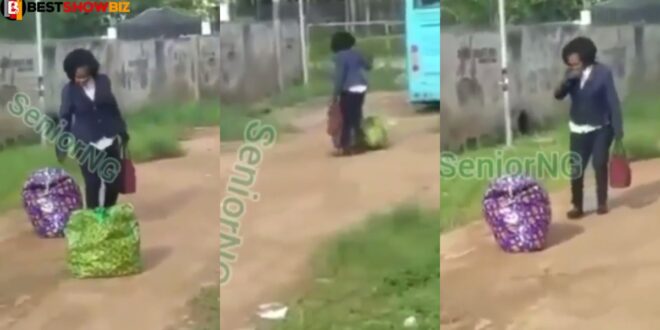 Indeed, we are living on a horrible, insane, and cruel planet. Strange things do happen that defy my ability to comprehend them.

In a viral video, a gorgeous young lady went insane just after she arrived at the airport, ready to fly to a strange land.

The unidentified woman can be seen in the clip walking and talking to herself while carrying her luggage, which she was carrying on her own trip.

It appeared like the voice heard in the background of the video was extremely concerned about the lady’s condition.

It went on to warn viewers not to share any critical information about themselves with anyone, especially if the information involves traveling to a foreign nation.

“Make you get sense. Next time when traveling, make you not tell any of your family members.” The voice said in the video

You should listen to and watch the video so that you can hear the narration provided by the person who recorded it.