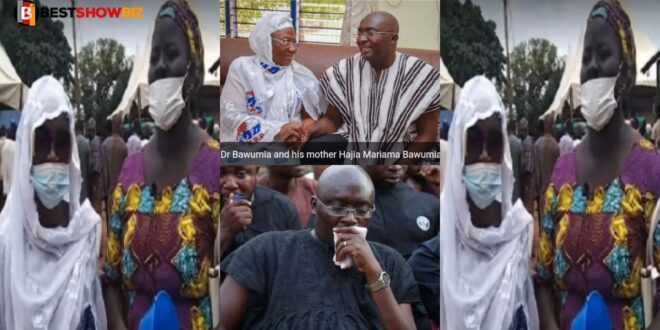 At the funeral of the late Hajia Mariama Bawumia, the mother of Ghana’s Vice President, Dr. Mahamadu Bawumia, two ladies made an unexpected demand.

According to them, the late Hajia Bawumia, their grandmother, owes them GHC 50, 000, which his children should pay in order for their mum’s soul to rest in peace.

Politicians, imams, and others from all over the country attended the funeral of the late mother of the Vice President. Culture is displayed in its entirety on the third day of the funeral, as is customary among the people of the north. This is where they demonstrate to visitors that they have a diverse cultural heritage.

Read Also  "The women you slept with cheated on you, get your 22 kids to take a DNA test"- Ibrah One advises Kennedy Agyapong.

Aside from the main funeral, there were a number of side events that kept many people entertained. Visitors were denied entry after the late Hiajia Mariama Bawumia’s male grandchildren erected obstacles and demanded a token. One person is allowed to enter at a time, even after payment has been made.

When two of the late Hajia Mariama Bawumia’s grandchildren rushed the funeral grounds, took the microphone, and chose to make a solemn announcement, it was a frightening moment. The young lady stated that their late grandma owes them GHC50,000 and that her children must pay the money as soon as feasible.

Please see the video below.