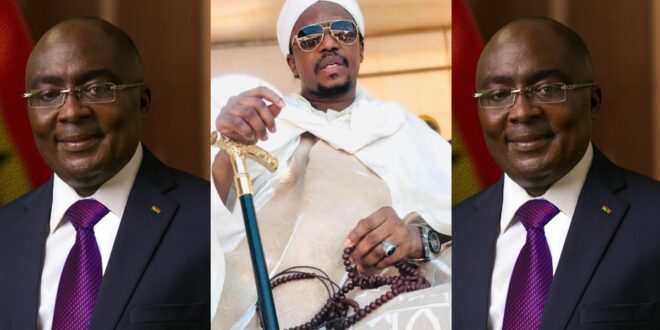 Bawumia Saddened by the death of Shaykh Maikano after he was k!lled by armed robbers.

I received with shock the news of the death of Shaykh Ali Ahmed Maikano Kalamu this morning.

The learned Shayhk was a man of peace who worked for the unity of the Muslim community in Ghana.

I offer my condolences to the Maikano family and the Jallo fraternity.

May Allah grant him Jannatul Firdaus and unite him with his father, Shaykh Abdulaihi Maikano and all departed souls.

we confirmed the news, adding that the misfortune occurred this morning on the Abromase lane, as Ali Maikano Jallow and his entourage were on their way to a Maulid event where he was a Special Guest.

Armed robbers are said to have blocked the road and were robbing motorists, opening fire in the process, hitting Ali Maikano with a stray bullet.

Police have also launched a manhunt for the robbers and are calling for the public’s assistance.

In the midst of conflicts between his father, the late Maikano Jallow, and the Ahlussunna sect, and later between the father and National cheif Imam Usman Nuhu Sharubutu of Fadama, tributes have poured in for him, with many hailing him as a peacemaker.

Read Also  Man caught the world most expensive fish worth $2.6 million and ate it with his village without knowing -Photos

When his father died, Ali Maikano was supposed to succeed him as Khalifa, but he refused, choosing to wait for his turn instead. But it would not be the case.

Massive crowds are set to descend on Prang in the Brong Ahafo Region to pay their respects to their beloved Ali Maikano.