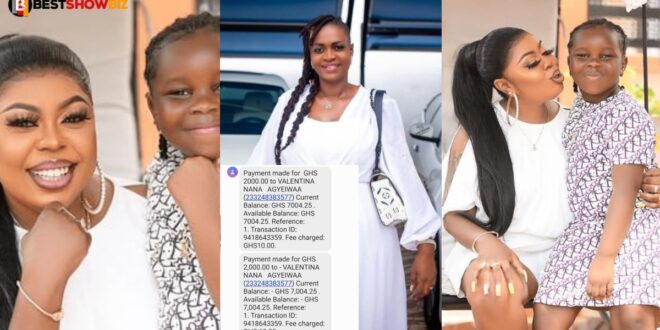 Ayisha Mordi, Stonebwoy’s biggest fan, and Afia Schwarzenegger, a self-proclaimed comic, are now washing their soiled clothes on the streets.

Everything began when Ayisha Mordi came out swinging at those close to Moesha Boduong in the aftermath of the latter’s conviction.

Ayisha began by accusing Moesha’s pastor, Gabby Ibe, of pressuring the actress into selling her possessions to his church after she repented. She went after Victoria Michaels, the model, for her role in Moesha’s dilemma.

She later put the heat on Afia Schwarzenegger, but Afia’s answer was savage and filthy.

Ayisha Modi has now released a screenshot of a mobile money transaction between herself and Afia Schwarzenegger, proving that she is a beggar.

Perhaps to show the world that she previously fed Afia Schwarzenegger and her family, Ayisha Modi released a screenshot of GHC2,000 MoMo she gave to Afia through mobile money.