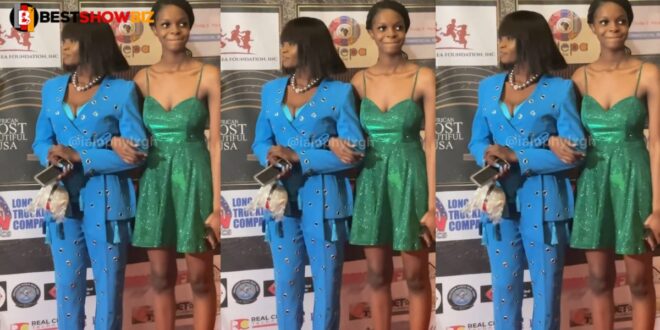 Ayisha Modi shows the face of her beautiful daughter for the first time on social media.

Self-acclaimed Bhimnation PRO and social media figure Aisha Modi, who is well-known for her outspokenness, has revealed the face of one of her children for the first time after appearing on a television program with her.

Currently, in the United States, the die-hard Stonebwoy fan who used to be married to Ofori Amponsah attended Africa’s Most Beautiful beauty contest, which was held in New Jersey, United States.

In spite of the fact that she is well-known all over the world, Aisha has kept her family away from social media and the general public. Aisha was spotted with a young, tall, and gorgeous lady who was dressed in a green gown and looking absolutely stunning as she posed with her mother for a photograph.

From the appearance of the photograph, it can be concluded that Aisha’s daughter is the polar opposite of her mother, as she has a serene and innocent expression when contrasted to her mother.

See the picture below.