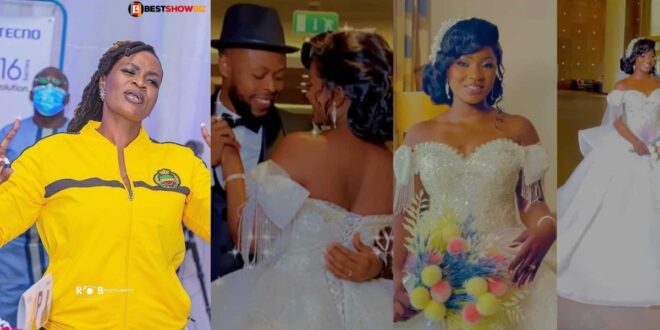 Ayisha Modi issues a warning to Kalybos and Ahoufe Patri after their wedding video surfaced online.

Ayisha Modi of BHIM Nations has issued a warning to Kalybos that if his good-looking wedding video with Ahuofe Patri turns out to be a hoax, he will be dealt with.

Kalybos’ Instagram followers were shocked when he posted a video from what appears to be a covert wedding with fellow actress Ahuofe Patri.

He captioned the video with the phrase “Love is a beautiful thing.”

The two comedic actors have been portrayed as lovebirds in each of their films, leading many to believe they are a great fit for marriage.

Despite the fact that many have called for them to be together, the two have denied any kind of connection on several times.

Finally, it appears like their followers’ dream has been granted, but what is perplexing at the moment is that the footage may have been taken from a movie scene.

While sending Kalybos a congratulations letter, Ayisha Modi warned him that if she found out later that the video was not from their wedding, he would be severely punished.

Read Also  A man in American recounts his terrifying ordeal after his mother used juju to make him appear in their village.
Share