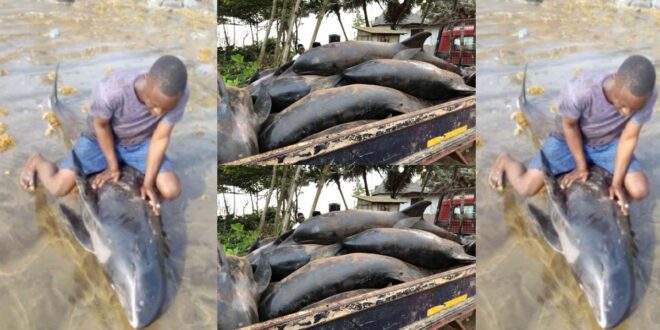 The residents of Axim have begun smoking and frying some of the washed-ashore dolphins, according to a follow-up visual observation by UTV Ghana.

For chop bars and retail consumption, the people of Axim smoke and fry washed-up dolphins.

The already-dead dolphins were purchased from people who picked them up from the beach when the tragic event happened, according to the fishmongers.

They have no plans to return the dolphins because they have already roasted, smoked, and fried some to sell on the street and export to chop bars.

Read Also  'I don't want to brag, but I can live good without working on youtube for the rest of my life' - Wode Maya

They clarified that they would not return the dolphins to anybody for whatever cause until they are paid for the costs of obtaining and selling them.