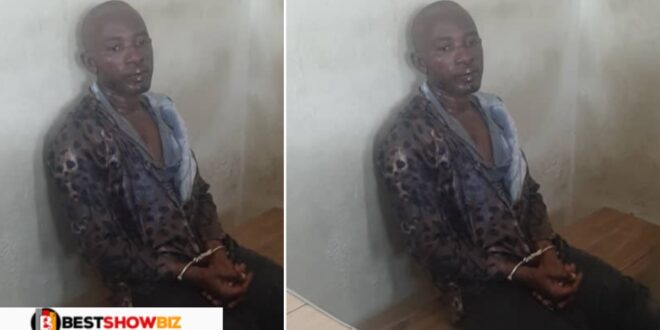 A 44-year-old man has been arrested by police in the Ashanti region’s Kodie district command for allegedly murdering his pregnant wife on Saturday, October 16th, 2021.

According to Ashanti Regional Police Public Relations Officer ASP, Godwin Ahianoyor, the suspect, Maxwell Boadi, was apprehended from his hideout at Kodie on October 19, 2021 in the Afigya Kwabere district.
The suspect is accused of murdering his wife, Pricilla Owusu, 31, over the weekend in Nyekyerenyase during a marital dispute.

Following his arrest, Boadi was turned over to the Kumasi South Suntreso police command to assist police investigations and possible prosecution, according to Starr News.

Meanwhile, the victim’s lifeless body has been deposited at the Komfo Anokye Teaching Hospital (KATH) morgue for preservation.