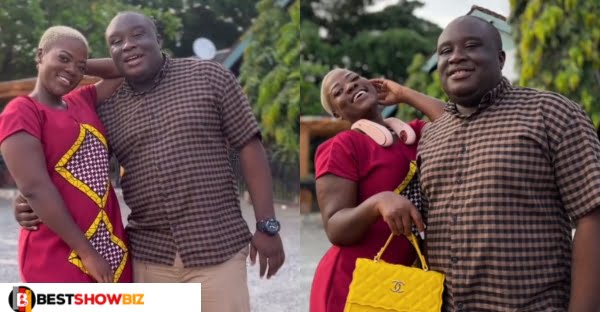 Asantewaa doesn’t look happy in the video: Netizens react after Asantewaa flaunted her husband for the first time.

Some social media users reacted to Asantewaa’s video, which sees the TikTok sensation having quality time with her husband, Mr. Jeffrey Obiri Boahen.

After emerging on the internet, the video elicited heated reactions from fans and followers of the young TikTok star.

Some of the comments on the video suggest that Asantewaa shared it out of embarrassment in order to disprove her divorce rumors which have washed the internet following her alleged unhealthy relationship with her manager.

Others believe Asantewaa uploaded the video to deflect attention away from her manager, whom many believe is having an affair with her based on how they seem in recordings.

Meanwhile, some people believe that Asantewaa, a nurse by profession, was unhappy making the video with her spouse, who they say is older than her.

Read a few comments under the video post of the popular Kumawood and TikTok Star;

donkor.ike: “The vibe is different, unlike the manager ????”

shining_media_princeromeo: “???????It’s by force doing…she did that cuz we threw some sense at her….But yet still, She ain’t happy doing this video like when she is with the manager. ? I know for sure that the manager has chop am???”

koby_chris: “I can see the man is older than her that’s why she wants to use manager as an excuse herrr we nor kiddies for here who sent make she go marry opanyin toto ?? I now gerrit ???”

princequaku: “The fire ? has really burned her. W) b3ka nokware”

wanbowman: “Now I understand why she no dey flex de hubby online. Get married to ur mate you say no, no vibe between em kraaa”

ABOUT AUTHOR
Eugene Nyarko is an entertainment and showbiz pundit, writer and freelance blogger. He is passionate about what he does and has help increase the value of entertainment contents online. Eugene is also a Java programmer, you can contact him via Email- nyarko[email protected]