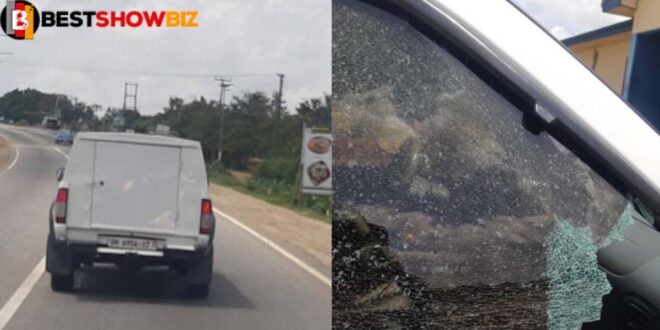 On Thursday afternoon, the Winneba Police Department responded to a timely call that stopped another attack on a bullion vehicle.

A similar occurrence at Adedenkpo, near James Town in Accra, resulted in the deaths of a police officer, Constable Emmanuel Osei, and a hawker, Afua Badu, just a few days ago.

The bandits shot at the front passenger seat, where a police escort was sitting, shattering the window in the process, according to Adom Fm reporter Kofi Adjei.

According to him, the police escort then told the driver to hurry away while he called for backup.

The Winneba Police Patrol unit that had been ordered to Mpata Junction rushed to the scene and engaged the criminals in a gun duel, but they fled.

Meanwhile, the good news is that none of the passengers in the bullion van were injured, and the money was unharmed.