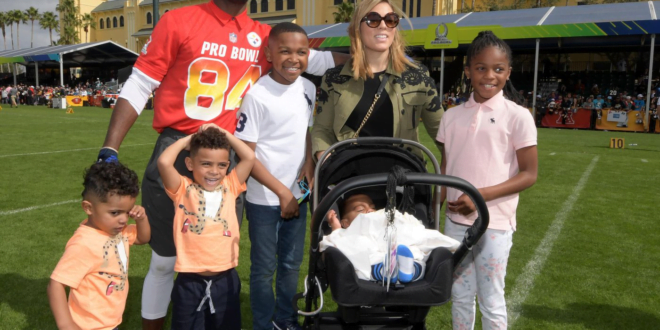 Antonio Tavaris Brown Sr. (born July 10, 1988) is a free agent in the National Football League. Brown grew up in Liberty City, Miami, and attended Miami Norland High School. He played college football at Central Michigan University, where he was an All-American punt returner in 2008 and 2009. Brown, a sixth-round pick of the Pittsburgh Steelers in the 2010 NFL Draft, had more receptions than any other player in the league from his rookie season in 2010 to 2018.

Antonio Brown is a natural athlete. Eddie Brown, his father, is a well-known football player. He appeared in AFL (Arena Football League – the indoor American league for professional players). He is widely regarded as the greatest Arena footballer of all time.

Eddie divorced Antonio’s mother when he was only ten years old. After that, the boy spent a long time at his mother’s house.

After Eddie’s retirement, Brown Sr. and his son grew closer. They spend as much time as they can together. Eddie is currently married to Heather Brown.

Adrianne Moss is Antonio’s mother’s name. She and her ex-husband Eddie Brown have two sons, Antonio and Desmond. In the early 2000s, she remarried another man, Larry Moss. Larry and Antonio did not get along. The boy was 16 when he left his mother’s house and became homeless. He was living in his friend’s car. Then, in front of the boy, his coach, Mr. Azzani, opened the doors to his house and invited him to live with his family. Antonio’s father later returned to his life and took him away from the coach’s home.

Antonio now maintains warm relationships with his mother and is not resentful of her. He claims that he does not blame his mother for anything and that he speaks about their past problems in order to inspire other children who are in a similar situation.

Desmond Brown is Antonio’s only full sibling. Desmond, like his father and brother, is a professional American football player. He plays for the “Pittsburgh Panthers.” He, like his brother Antonio, graduated from Miami Norland High School. He later attended Miami Dade Community College to further his education.

Antonio Brown is a well-known athlete, but to his children, he is simply a favorite father. The popular wide receiver has never been married, but he is the father of five children by three different women.

Shameika Brailsford is the mother of his oldest son, Antonio Brown Jr. (nicknamed “Lil AB”). She made headlines in 2012 when she began a custody battle for her son with Antonio Brown Sr. Their legal battle lasted years and ended with an agreement that the American football star would pay his baby momma $5,000 per month. Antonio spends a lot of time at his father’s house. He gets along well with his four younger half-siblings as well as his father’s current girlfriend, Chelsie Kyriss. Date of birth: 2007

Antonio’s only child is Antanyiah Brown, a sweet little girl. The athlete had her with his ex-girlfriend, hairstylist Wiltrice Jackson. Despite the fact that Antonio and Wiltrice divorced many years ago, they remained in touch for the sake of their daughter.

Mr. Brown evolved into a devoted and generous father. He lavished money on Antanyiah’s tenth birthday celebration, which took place on a beautiful beach in Florida.

Not only is the girl close to her father, but also to her half-siblings and stepmother Chelsie Kyriss. She spends a lot of time at her father’s house and may even move there entirely because her father began a court battle with her mother for full custody of the girl in February 2019. Date of birth: March 18, 2008

Antonio’s oldest common son with his long-term partner Chelsie Kyriss is Autonomy Brown. As his mother admitted on Instagram, the boy “deserves to have such a name.” The boy lives the carefree life of a small boy. He participates in American football with his father, takes vacations with his parents and siblings, and attends public events (supervised by his mom and dad, of course).

Autonomy had his first day of kindergarten in August of 2019. He is a cute little kid with over 129k followers on Instagram. His parents are in charge of his account. Date of birth: April 1, 2014

Ali King Brown, the second son of Chelsie and Antonio, is not as well-known on social media as his older brother – his page has only 70k+ subscribers. Despite his father’s assertion that he does not want his sons to become professional American football players, all of them participate in this sport. As a result, Ali is frequently depicted holding a ball. The boy grows up in a happy family, surrounded by his parents and siblings. Date of birth: March 23, 2015

Apollo is the newest member of the Brown-Kyriss clan. He is the adorable little boy who is lavished with attention from his sister, older brothers, and parents. Date of birth: August 2, 2017