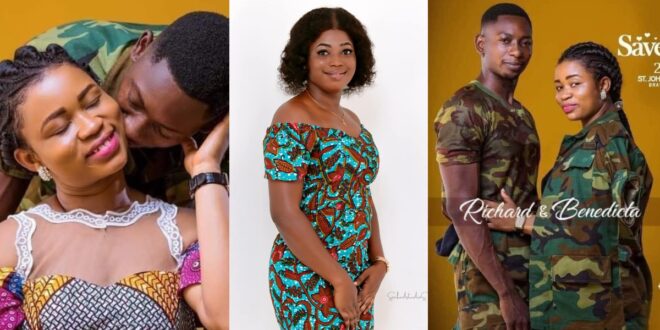 Agu Matopa Richard, whose wedding at Brahabebome in the Ashanti Region sparked social media uproar, has finally spoken out about his relationship with Ease.

He says he only knew her for a month and that her claims of spending GHC 30,000 on him are not only absurd but also preposterous.

He claims he spent some time with her but was approached by another man who appeared to be Comfort’s boyfriend, prompting him to leave her.

Comfort just purchased him socks, according to Agu Matopa, so it’s surprising that she’s telling the world that she took care of him.

The Military man replied that she only met him twice since that is the maximum amount of occasions you will see a Military Officer at the Academy.

Read Also  Love Is Sweet: See Photos Of What Some Married Men Do Out Of Love

He claimed that Comfort is unemployed, and that the fact that she says she spent GHC 30,000 on him astounds him because he has no idea what that money was used for.