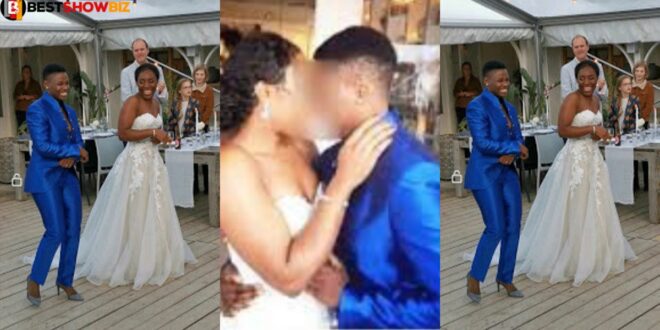 It has infiltrated the churches, and the scriptures on sodomy and lesbianism have been distorted to the point where a man and a woman can unite as one. It’s known as “Love Wins.”

The lesbians were married openly in Europe, namely the Netherlands, and to the surprise of many, a number of notable people attended the wedding ceremony, including dignitaries and lawyers from the United Kingdom, the United States, and Canada.

According to the information that has been circulated, the two met in a club and shared their personal histories with one another. According to reports, Judith told her husband about her difficulties with men, and Nghixulifwa assured her that she would never marry another guy because a man had promised to marry her but then absconded with her money to marry another woman in another country.

Read Also  wayoosi set to do a Kumasi Drill song as he raps like Sarkodie.

Surprisingly, the wedding was officiated by the Rev. Jide Macaulay, the founder of the House of Rainbow Ministry, a Nigerian popular clergyman who also happens to be gay.