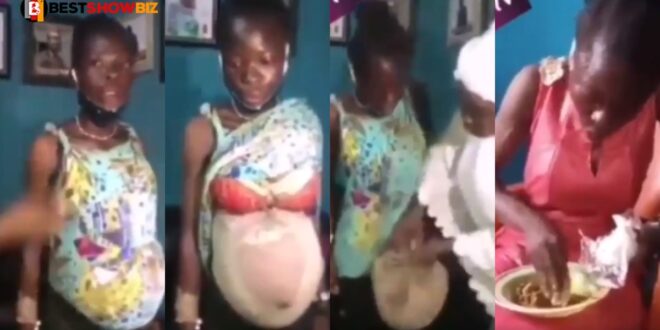 Various reasons exist for why women fake their pregnancy, and while we are still investigating the case of Josephine Panyin, who claimed to be pregnant and was kidnapped, another lady has been “arrested” in Nigeria for faking her pregnancy.

A group of four women, including a police officer, videotaped a 25-year-old woman faking her pregnancy in order to beg from people so she could feed herself.

When the fake pregnant woman discovered that there was a policewoman among the ladies, she felt scared.

However, the policewoman among the ladies intended to arrest her, but the other ladies, all of whom are believed to be Christians, appealed with the officer that this woman needed assistance.

The lady creates her ‘pregnancy’ with the use of clothing. Her arresting officers claim that she is using the fake pregnancy to solicit money from individuals.

She does not appear to be a 25-year-old lady when her facial expression is closely examined. Poverty and malnutrition have had a significant impact on her physical appearance.

In keeping with their promise to the woman that they would aid her, the Christian ladies supported her in getting rid of the fake pregnancy.

So, it was truly out of poverty that this woman pretended to be pregnant in order to collect money from unsuspecting individuals she came across.

After she was released by the women, she was given food to eat to keep her healthy.