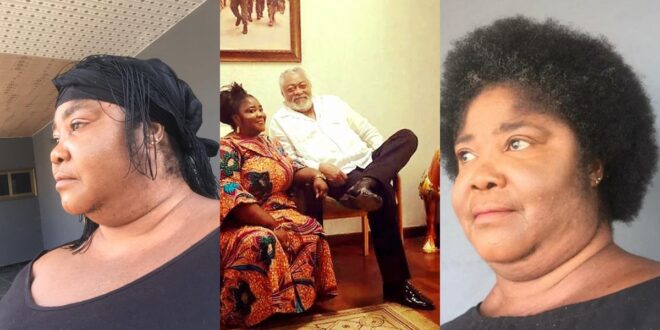 As we are trying to find the truth behind the drama of a woman claiming to be the daughter of the late J.J Rawlings, another beautiful woman also with the same claims has surfaced.

Another 50-year-old woman identified as Kate Yeboah has also revealed on a phone conversation that she is also the daughter of the former president.

According to Kate, her mother met the late Rawlings at Breman Asikuma where she resided, and had a relationship that bears her.

Kate claims her aunty together with her Military husband took care of her since her mother couldn’t take care of her as a single parent.

she also revealed that her mother once collapsed when she heard Rawlings’s name which also got her much attention that Rawlings is truly her father since it has been rumored.

Kate claims she futher developed a father and daughter bond with Rawlings after her mother confessed to her.

she further claims she has since been talking on the phone with Rawlings and also messages and has even paid a visit to him with her children.

Kate said she has to keep her relationship with her father ‘Rawlings’ secrete because she wasn’t sure of how his immediate family will take the news when asked why is she out now that he is no more.

Kade also revealed that the former president adequately compensated her for their lost time by paying her children’s fees as well as taking care of their upkeep till his death in November last year.

in all Kate Yeboah is the second woman to claim J.J Rawlings is their father which the first one is Abigail Mawutor Rawlings, 52-year-old.