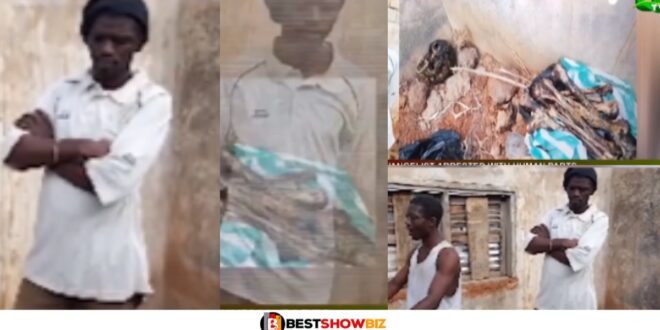 An Evangelist was taken into custody at Buokuo Nkwanta in Wenchi for possessing human body parts.

An individual who called himself an Evangelist was detained in Buokuo Nkwanta in Wenchi with a number of human body parts.

Following his arrest, the Evangelist known as Elijah is currently being held in custody by Chiraa law enforcement.

According to the reports, a security guard working for a query company stumbled across human remains at the lonely home of an evangelist located in the woods.

He notified the local representative in the Assembly, who led a team to the house and was astonished by what they saw when they got there.

At the home of this Evangelist, they witnessed raw and cooked human body parts, as well as human parts that were in the process of being cooked.

The lawmaker went to the police and reported the incident, which led to his detention.

It would appear that he dug the body up from the graveyard in the nearby community.

In the beginning, he disputed the allegations, but when his friend who smokes pot was questioned about it, he couldn’t deny it anymore.

The investigation at the cemetery revealed that a graveyard had been dug, but there was no body in it; therefore, they assume that the body was what was discovered in Evangelist Elijah’s house.