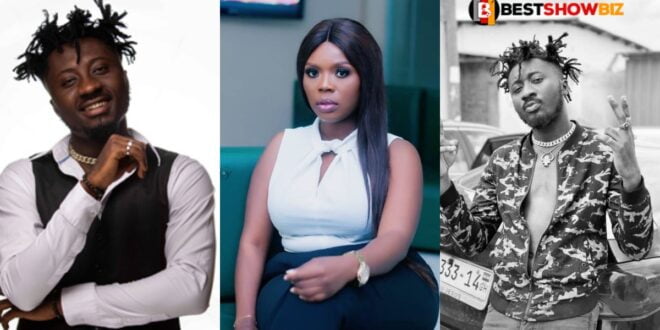 Amerado Burner, a 26-year-old rapper from Ghana, has taken a chance on Delay, a Ghanaian television presenter.

Amerado made an appearance on the Delay Show and immediately won Delay over with his energy and attitude.

When the conversation drifted to Amerado’s love life, he seized the opportunity.

Delay inquired if he was dating someone, to which he replied that he was.

Delay inquired as to whether he would reveal who that person is, but he stated that he prefers to keep it private.

He wants supporters to focus on his career rather than other distracting concerns such as his love life, according to him.

Delay went on to say that his position is smart since there will be no scandal if it does not work out.

He promised it would work out, but no one knows his girl, so it may be Delay!

The clip is a preview of their future interview on the show, which will appear later this week.

Amerado, one of the hottest up-and-coming rappers, makes his first visit on Delay’s show.

Amerado, whose real name is Derrick Sarfo Kantanka, burst onto the limelight in 2015 after placing third in the Solid Fm Kumasi Freestyle competition.

He has subsequently gone on to become one of Kumerica’s biggest stars, bringing Kumasi rap back to the forefront of Ghanaian music.