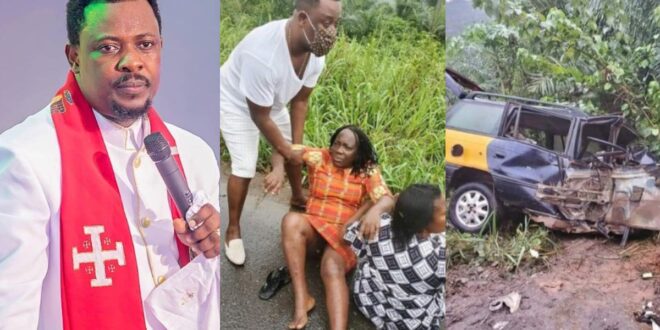 Prophet Nigel Gaisie, the founder and leader of Prophetic Hill Chapel, has allegedly been in an accident.

Many citizens were taken aback by the report, considering that he is the country’s foremost Prophet, who is known for foreseeing a broad variety of events.

It seems that his God forgot to warn him that he might be in an accident.

According to reports, the accident occurred in the Oti Area.

Nigel, who posted images from the scene, wrote:

“No comments, the effect of bad roads, four dead. The drivers were dodging potholes. Ghana at 64. He then shared Pictures of the tragic accident alongside Photos of those who were dead and injured.”